Of course, to become unthinkably rich without having a penny of money is not so simple. Each of the modern owners of millionaire’s fortune went to get rich in his own way, so it is safe to say that there is no universal formula that allows the average person to make a fortune. Still, sociologists have analyzed the lifestyle and habits of millionaires and found a few things that unite them. 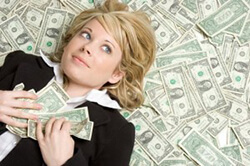 I would like to add that many things will seem trivial and obvious to you, but put them all together and you’ll probably notice that you yourself are missing a lot of these, and how often we deviate from these rules.

Most wealthy people don’t shy away from their dreams and fantasies. Dreaming about different subjects, millionaires focus on their goals.

Albert Einstein put it this way:

“Imagination is the pre-order of man’s future life. This was also the opinion of the Buddha himself, who said that our life is the result of our imaginations.”

Man, by dreaming and fantasizing, creates in his mind an image of future success in his life, thereby turning on a certain switch in his head, which helps him see in ordinary things the way to his dreams.

Dreams, thoughts and fantasies are an attitude that the brain takes to processing, and surprisingly on a subconscious level begins to look for ways to achieve goals. The subconscious mind begins to actively search through the daily hustle and bustle for people, things, events, opportunities, in general, anything that moves a person even an inch toward his dreams. Millionaires know all this and actively use it. Steve Jobs, Bill Gates and many other big names – they all dreamed of changing the world, and they succeeded very well.

Millionaires have a habit of communicating only with the same motivated and promising people, because having such friends and acquaintances, it is easier to stay afloat and to keep abreast of all the important events.

Communicating in a circle of entrepreneurs, you can easily learn their secrets, and having you as a friend, perhaps one of the new friends will propose a good project that will lead to the cherished goal.

If there is no opportunity to join someone’s company or to surround yourself with people who are interesting, then you should study them from afar and then begin to act.

Treat money as a tool

Many millionaires are used to doing their favorite things that bring them money, and they use the money that comes to them as a tool to make their business flourish and grow. And many millionaires perceive having money as just a nice bonus that enhances their quality of life.

For the majority of wealthy people there is no money cult, they just have a habit of doing what they love and devote themselves to it fully and the money comes by itself.

The habit of living modestly

A huge number of millionaires live very modestly, having huge savings and being able to afford anything. This trait is typical of those millionaires who saved and achieved everything through their hard work, saving penny for penny and generating a fortune. It is also a characteristic of those people who are not slaves to things and consumption, for whom money is but a path to something higher. I have written before about an experiment for millionaires where they proved themselves to be people with modest needs.
Warren Buffett, who has a billion-dollar fortune, lives in a house he bought before he was fabulously rich, for only $31,000.

Millionaires know what they’re worth; they don’t have to prove anything to anyone. At any given moment, they can take whatever they need from life. It is this quality that allows them to get richer and richer every day, without spending their savings on ostentatious tinsel and luxury. This is rather the trait of those of the “rich people” who got their millions without much effort.

The habit of investing.

Millionaires invest money in different funds, investment projects, banks, and real estate and wait until their investments bring profit, and then they invest this profit in something else, more substantial.

For example, it is possible to save for a long time money for a car, an apartment, a fashionable gadget, and, having saved, to buy it. But do not forget that when you get what you want, you can also get a bunch of additional costs in addition, and even things have a shelf life and service life, which will come to an end one day.

Millionaires have a habit of saving money first, then investing it, and then using the interest and dividends to buy the things they want, because even when things go bad, the investment will continue to generate profits.

No more than 10% of low-income people make a to-do list and organize their time, as opposed to the successful ones, which according to some studies, number about 90%.

A striking example of such people is Richard Branson, who sets ambitious and enormous goals, makes a plan to achieve them, and when he achieves them, he sets new ones.

Successful people do not waste a single minute in vain, their time is scheduled by minutes, and the goals – by steps. Such habits help not to stop and move forward.

The amazing fact is that a huge proportion of millionaires have made their fortune in the most ordinary and primitive businesses or industries: trading, farming, service stations, etc. Warren Buffett, Paul Getty, and many other successful people have taken the position that one should do whatever it takes not to work for someone else, but to mind one’s own business.

Millionaires are very hardworking. For the average average person, there is a 40-hour work week, outside of which they simply rest. Millionaires work 60-80 hours a week. This does not mean that they devote all that time to their professional activities. They can work 40 hours a week on their main job, and devote the rest of the time to running their own business, trading on the stock market, buying stocks, currencies, and options. The habit of millionaires to work hard is related to energy. Millionaires are almost always in excellent spirits.

The habit of constantly learning.

Most millionaires are constantly learning and place great importance on the education their children receive.

Many people have heard of young millionaires who did not even have a high school education, but in fact these are isolated cases. Even Bill Gates, who is rumored to be “uneducated”, is a trustee of a major university in the United States. Steve Jobs studied in several faculties at once. I guess that says a lot.

Millionaires are constantly learning something, striving for something, even those of them who, without education, began the path to the tops, sooner or later try to get it, developing their own potential.

Millionaires always know their income and expenses. Usually the item of expenses is not greater than the item of income. This trait millionaires develop in the very first stages of becoming a wealthy individual. When planning a budget, each of them knows exactly what and how much of their cash flow should be spent on.

Millionaires usually do not allow unnecessary spending. The richer and wealthier millionaires are, the more carefully they plan and monitor their cash flow and budget. If you don’t keep track of it, there will be people who will quickly exploit the gap.

The habit of being goal-oriented.

Most rich and wealthy people have faced business problems, gone broke, had hundreds of different failures, and the one thing they all have in common is that they didn’t give up.

Each time they fell, they learned from their mistakes and moved on. They weren’t happy with the arrangement life gave them, they didn’t put up with it, and in the end they succeeded. There are countless examples in the history of the world of such people whose determination led them to success and new discoveries. Einstein, Edison, Ford, Jobs and hundreds of other great men never gave up, and through their perseverance they became the greatest and most famous people on the planet.

Millionaires have the utmost confidence in themselves and in the rightness of their actions. No, this is by no means banal stubbornness or a sign of detachment from the realities of life. On the contrary, each owner of a large fortune knows life without any embellishments, which is why he calculates his behavior in one situation or another very accurately. Knowledge of the laws of life and competent distribution of accents in it, certainly, brings success, which further adds to the character of confidence.