Currys hangs up on Carphone Warehouse with retailer rebrand 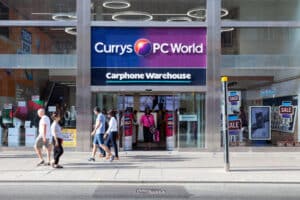 The Carphone Warehouse brand is set to vanish from the high street after Dixons Carphone changes the name of all its shops to Currys.

The electricals group plans to rebrand its retailers, including Currys PC World, Team Knowhow and Dixons Carphone, in the UK and Ireland under the single name.

A new Currys website will be launched as the name appears on more than 300 shops, 13,000 staff uniforms and 300 delivery vehicles, the FTSE 250 group said.

Carphone Warehouse was co-founded in 1989 by Sir Charles Dunstone and Julian Brownlie, who put £6,000 into the company from their savings. In 1990 Dunstone brought in his school friend David Ross, a chartered accountant, who became chief operating officer.

The company name subsequently engendered jokes in the City that the group did not comprise warehouses and did not sell car phones.

Dixons Carphone, which was formed through a merger between Dixons Retail and Carphone Warehouse Group in 2014, will also change its name to Currys plc on the London stock market.

The changes will take place in October after the group’s annual shareholder meeting in September.

“Since Henry Curry first started helping everyone enjoy the amazing technology of his day — the bicycle — in 1884, Currys has been the best known and most trusted brand in tech. We’ve worked hard to become one joined-up business and becoming Currys reflects and accelerates that.”

The move would make it easier for customers, who could “turn to Currys” for all their tech needs, he added.

Baldock admitted it was a “bitter-sweet day” for brands such as Dixons but insisted: “Now we can get behind a brand that will cover it all.”

No shops will close as a result of the name change and overhaul, and the group’s international brands in markets such as Norway and Sweden will remain unchanged.

The change forms part of a recently announced £190 million increase in investment in the group, with revamped stores, an online push and staff training in technology among plans that are on the cards.

It marks the latest rebrand for Dixons Carphone. The Dixons name was ditched on the high street in 2006 but was retained for its online retailing operations and has also been used for Dixons Travel in airport terminals.

However, the group announced plans in April to shut the 35-strong airport shop business as a result of trading difficulties because of the pandemic and the end of tax-free tourist shopping.

It also axed all its 531 standalone Carphone Warehouse outlets last year, instead keeping the name as shops within larger shops.

The group recently announced plans to shut its 81 Carphone Warehouse shops in the Republic of Ireland, with the loss of almost 500 jobs.